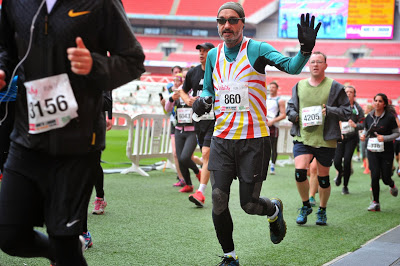 Why does Mr Smith run?  That is quite a long story, but all the details of why are here…

It has been a while since my last post and I have a number of posts to write and catch up on.  I normally try and keep them in sequence, but this one I am jumping to the top of the list and I will catch up on the others later.

So what is all this running about.  Well, I started about 1 year ago following a conversation with a friend who I challenged to join me on a massive cycling adventure and the retort was that she would if I did a half marathon.  I could not refuse the challenge, so I started training.  Sadly the opportunity for the cycling challenge does not appear to be realistic (although I live in hope), but as I had started training I had to carry on.

Since then I have tried to fit training in around work and life and have not necessarily been able to do as much as I would want, some of which has been down to injury,

My philosophy on runs is to do the ones that hold some interest for me, either somewhere I find interesting or iconic locations.  To start with my first 10k was in Melbourne, not exactly a bad place to start and to finish outside one of the best stadiums in the world, the MCG.

Sadly for me though I had been struggling with an Achilles problem and when out training a couple of months later I sprained my ankle.  Little did I know when I did it I cracked a bone in my foot, stretched a ligament too far and split another tendon, so all in all. There were now 4 problems with the ankle.

Despite this I managed to run the New Years Day 10k in Hyde Park, but after that I gave in and went to see a consultant about the ankle and basically he said, surgery!  The date got booked for the surgery, but I still managed to sneak in my first half marathon, North London, which finished on the Saracens rugby pitch and the route went through Wembley stadium and I got to run along side the pitch.  I even managed sub 2 hours, which was really pleasing!

Since then though I have had the surgery done at the end of March and I was then in an air cast for 3 weeks and having physio for another 3.  At the end of this period I went back to the consultant who said all looking ok and I could start running again (I had not run a single step since the op, but had walked as much as the ankle would allow), this was 8th May 2015.  So what did I do 2 days after this?  I ran the Hackney Half Martahon, not very quickly, but I did it!  I would have been pleased with anything under 3 hours, but did 2:21!

It was a great feeling just getting round, but the stubborn side kicked in and I managed to run the first 10 miles before reverting to speed walking and trotting.  I was not running quickly and the ankle was fine, the rest of the body was struggling though due to no training.

I enjoyed taking in the sights of the streets I know and the crowds as well as running through the Olympic park,  I will be back next year.

When I was running there were quite a few people that were suffering and a number being treated by the ambulance service and St Johns Ambulance who were doing a great job.  I was running close to a couple of people or who were friends and I could tell one of them was struggling and heard her say she wanted to be sick.  I could see she did not have any water with her and dropped back and gave her a bottle I was carrying.  I always make sure I am hydrated and it looked like that was the root cause of her problems and it definitely helped.  I made sure that I stayed close for a while and made her get another bottle at the next water station, which definitely helped.  Making sure she was ok I then went at my own walk trot pace again.

The family gene of speed walking meant I was overtaking some runners (who were running) while I was walking.

Anyway, this good deed got me thinking, although there was only a couple of miles to go I still had time to think.  It made me really take things in more and even a genuine smile crossing the finishing line. Yes it was an achievement for me and I pushed myself hard, but the real thoughts were about what I could do to help others.  With work I have limited time and opportunity to do things, what with training, home and my business paper work I can not commit, at this time, to anything regular, but supporting others is definitely possible.

Also a few people have asked if I am raising money doing my runs, not specifically, I am doing it for me and to make me a better person physically and mentally.  However any support you can give to keep me motivated on my recovery and supporting charities would be appreciated.  I match donations on of the cost of the events to charity giving, e.g. if an event costs £20 to enter I will donate the same to a charity.  I have (or will have) one event at least each month this year and there will be more, from a mile to more halves and maybe more and again next year and so on!

There are 3 I will be supporting:

Action Against Hunger – Everyone who knows me knows I love good food, but I also support the charity to try and make sure others have the chance for any food at all, specifically at the moment those in Nepal

Asthma UK – I have been a long time donator as I have had it all my life, but I want to help others who have it a lot worse and can not do what I do

British Heart Foundation – In memory of my Dad, enough said!

I am not asking anything of anyone, but feel free to support or do your own thing to help others, but if you do then please share and raise awareness of all charities and the ones you support and let me know as it will help with my motivation.

If you do want to show your support and help me on my way then I have set up a charity page that I will add each event to:

So all in all I can do my bit, while still improving physically and mentally.  It may not be much, but everything helps.

If you click through on the link you will see that the next 3 events are:

But in addition to that I am already committed to:

I have also done a few other events since I wrote this original post, all part of my training schedule that I am sticking too: