Mr Smith goes for a run, quite a long one and around one of his favourite cities.

The long awaited Copenhagen Half Marathon had arrived, how did it go?…

You wake up in the morning in the hope that the weather forecast you saw the night before was wrong.  Pull back the curtains and no rain, great, however, there was a strong breeze, not good.  Oh, hold on, there is the rain!  Only a few minutes after opening the curtains it started.

Oh well, nothing can be done about the weather and something you just have to live with.  The normal breakfast was consumed, porridge, banana & blueberries.  Big advantage of staying in an apartment is the ability to manage your own food and nutrition. Granted, the previous few days nutrition were not perfect, but when in Copenhagen you have to go out and eat amazing food and try the wines to go with it.  However, race day is different, this needs to be done properly.

The bag was packed, gels sorted, recovery drinks in there and then to head out in to the wind and rain.

Off to the local train station, where other runners were congregating, and 12 minutes later we are at Nordhavn for the short walk to the start.  I had spent some time on Friday scoping out the journey to the start so I knew where to go and went straight to the CPH Half Village.  By this time I was a bit damp!

Me on the Wall of Runners 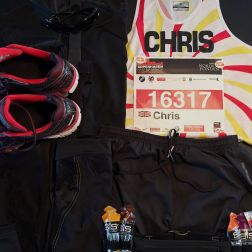 The night before it is time to get everything ready 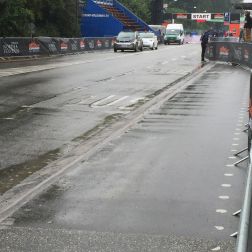 A bit damp at the start 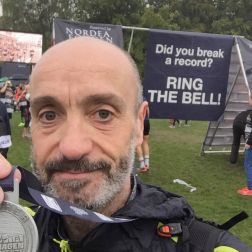 Cold and wet but loving the bling

The bling, that is what it is all about

All the necessary things were done, baggage dropped, bin liner put on, trips to the loos and warm up complete, then time to line up.

The great news was that the wind had eased a bit and the rain stopped!  The course was very wet though with big puddles.  By this time I had mentally adjusted my target to 1:50 as I thought with a slippy course I would be a bit slower and would not want to risk the ankle.

As 11:15 approached the tension was obvious among the runners as we all wanted to be off and then there was the gun.  We could see a large screen and watched the lead runners tearing off at a speed I would like to do for half a km let alone for a half marathon.  We started to edge forward, round the corner and the start line was in site.  There was a bit of a false start before we got in to running and about 6 minutes after the leaders started I was off.  Watch started and getting in to the rhythm of the run.

My basic plan was to cruise through the first 5k and then gradually speed up through to 10k, maintain to 15k and then speed up to the end with the final 6k being the fastest part of the race.  This allows me to get up and running and in to the event and avoids, hopefully, going out to fast and not being able to do a good time.

The atmosphere was amazing as we got going, despite the weather.  To be honest it was great all the way round, only a few spots where it was quiet, but that is to be expected.  The DJ’s and entertainment in the Power Zones really helped keep people going, I know it lifted me.  The DJ that had been positioned under a road bridge was taking full advantage and it was loud!

Anyway, all was going well through 5k, nice steady pace.  Ankle had a bit of pain with every stride, but it pretty much always does now, but at about 8km is started to be a bit more painful.  No obvious reason, no twists or anything, just started to come on.  It was manageable but I was wary so started to ease back a little bit.  However, through 10k the plan was still on track with a negative split that I was pleased with.

However, by this point I was aware that the GPS on my watch and the course markings were not matching up, with my GPS (for once) reading before the course markings.  At 10k according to the course, my watch said 10.3k.  I hoped that would re-adjust as we went through the second half of the race.

By now though I was easing off to try and manage the ankle through to 15k and I was deliberately going slower and had abandoned the idea of 1:50 but just wanted to complete.  The plan from now was all about managing the mental battle (which was very tough) of completing the run as the ankle was getting more painful.  By this stage stubbornness and pride were taking over and I vowed that I would not walk and that I would complete the course.

I re-focused and started to take the race in manageable chunks.  I was going to do the next 5k to 15k, then focus on smaller chunks to get me to the finish, 3km, 2km and 1km and I would be done!

All going well with that plan, running slowly and steadily and I was keeping out of the way of people, including pacers of the 1:50 people, which I did get engulfed by at one point.

When I say I had slowed down, according to my watch anyway, I had slowed at the 11km mark from an average around 5:00 to 5:10 pace down to 5:20 to 5:30.  It may not sound much but it is very difficult to run a lot slower than that when the legs have it in to them to be quicker.  Besides, running any slower would not make much difference to the ankle.

At about 18km it was still manageable but by 20km it definitely hurt, by which time it was raining again.  If I had not been so close to the finish I would have been walking by that point, but I also knew that if I took one step walking I would not run again and that it would probably hurt more, which it did as soon as I went through the finish, so at least I was justified in keeping running!

I was just going to keep plodding to the finish and take in the atmosphere which I did and all of a sudden we were heading towards the finish.  By this time though my watch had said I had done the distance in what would have been a time of 1:52:58, which I would have taken.  However, still about 600m to go on the course!  No chance of a sprint finish so I just ran to the line.

I did get my pain in to perspective as I was about 300m from the line where, unfortunately, there was a man on the ground having CPR and a couple of people jumping over the barriers to help.  I really hope that he is OK and will make a full recovery.  Nothing I could do to help as I did not see him until I was just running past and other were already there trying to help him.  Things like that do make you realise how fragile life can be and puts things in perspective.

After going through the finish and starting to walk, the ankle hurt like hell and all I could do was hobble. I had been running fairly normally, but the change to walking obviously finished it off.

I grabbed my medal and headed back to the baggage area (one of the best organised I have seen) and grabbed my stuff to put on dry and warm clothes, plus consume the recovery drinks.

The official time came in at 1:55:48, which was still 2 minutes 10 quicker than my previous best.  Disappointed as the legs had it in them to be quicker, but still happy given the ankle.

It was then just a case of hobbling back to the train, very slowly and to the apartment.  I know the ankle is not good as I have abandoned plans to walk to a restaurant I have been too many times in Copenhagen, but instead will use one very close to the apartments.

Overall, this was a thoroughly good event and well organised.  Only 2 gripes from me.  1, why use cups at the water stations?  Not sure if just me, but I can not drink out of them and much prefer a bottle as you can sip out of them without any trouble.  Trying to keep running and drinking from a cup is near impossible for me and I nearly chocked when trying to do it. The other thing was a few idiots crossing the course in front of the runners.  Appreciate that people need to get around but there were a couple of times that runners had to slow down or nearly ran in to people, not good.

Anyway, that did not ruin it as it was a good day, despite the weather.

It does mean for me though that I need to consider whether I will do events again and may need to drop out of the next few that I have coming up while I work out whether the ankle can cope and try and strengthening it up.  No running for 2 weeks I think is on the cards and I will be sitting on the bike in the living room keeping up the cardio work.

Thanks Copenhagen, you really are my favourite city.

4 Replies to “Copenhagen Half Marathon”