Mr Smith has found himself in Melbourne, one of the food capitals of the world and booked himself in to Supernormal for ‘Sunday’ lunch.  Was it a normal Sunday lunch?  Find out that Supernormal is anything but Normal…

Mr Smith has a rule, that does sometimes get broken, but he tries not to.  This is not to go to the same place twice.  The desire to go back to Chin Chin was strong, but Supernormal has been on the hit list since the last time he came to Melbourne, so he made sure he booked in there.

Turning up at 12.15 on a hot sunny day, the restaurant was already starting to get busy, but Mr Smith was given a prime position at the counter bang opposite the kitchen.  Time for more chef watching.

The menu was made up of 5 sections, the ideal was that you share dishes, but the waitress explained that they do some of the dishes in half sizes, perfect.  After a bit of debate he just asked for recommendations, which luckily matched most of what he would have chosen, so 5 dishes ordered and a glass of prosecco being consumed.  Sit back, relax and watch the chefs at work.

Although there is not a match in wine, the suggestions were there from the waitress, and every one of them was delicious and went well with the dishes.

Mr Smith started off with a delcious raw tuna dish that was complimented very well with some kimchi that gradually built up in spice.  It was great to watch the chef preparing the dish as she was very precise with the action of the cutting and the plating.

Next came a smoked beef dish with clam mayonnaise.  This was very complex on the palette with lots of different flavor coming through, the perfectly seasoned beef, then the clam and finally the mayonnaise, to name butt 3 distinct flavours.

That was the raw section over and done with, so next it was a cold pork belly salad, which was thin pork belly slices, with some beautiful garnish and a mala sauce that provided a l;overly heat.  This was matched to one of Mr Smith current favourite things, and Orange wine, as recommended.  They advantage of saying you will try anything, you do get to have some great combo’s, that you would never choose.  This was a perfect one and the wine enhanced the spice in the sauce to perfection.

So now was the challenge, a Lobster Roll,  Mr Smith has had lots of them from Bob’s Lobster, the street food specialisits in London (they are lovely), so this was going to be interesting.  Although the same basic ingredients the delivery was a little better at Supernormal.  The brioche bun was a little less buttery, but contained just enough to go with the lobster.  Very good indeed

Finally, in terms of savory dishes anyway, came a Pot Sticker Dumpling.  When ordering Mr Smith had no real idea how this would be, but he likes dumplings, so gave it a go.  You need to look at the picture to get the idea, but Mr Smith can do this at home.  There have been many Gyoza style dumplings that have been stuck to a pot.  However, none on purpose and always burnt.  The crispy the pancake worked really well in terms of texture for the dish, the dumplings were perfectly cooked and the filling full of flavour.   When adding a little bit of the black vinegar on offer they were even better.  This was accompanied by a suprisinglt good Pinot Noir from Victoria

So that was the savoury.  At this point Mr Smith was going to head off, but got tempted to have a look at the dessert menu.  Yes, you guessed it, something was ordered.  The fried custard with ginger syrup.  Deep fried custard is great, hints of dougnut and the ginger syrup added the heat to the dish.  A great end and th Japanese Saito that wen with it was a great refresher

Supernormal is definitely not normal, it is amazingly good.  Great service, food and entertainment watching the chefs.   Mr Smith managed perfectly as a single dinner on dishes designed to be shared.  A lot of thanks go to all the staff for guiding through both the food and wine 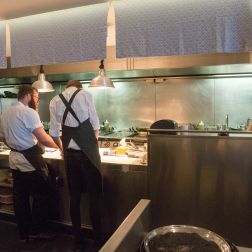 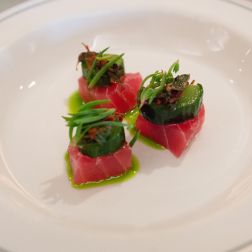 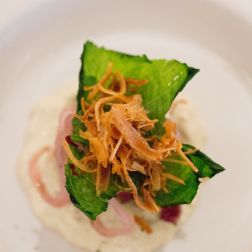 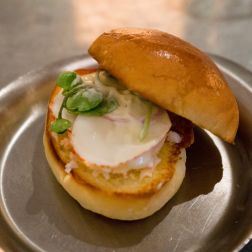 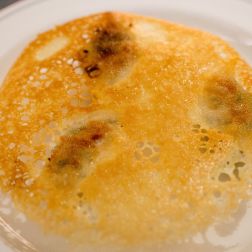 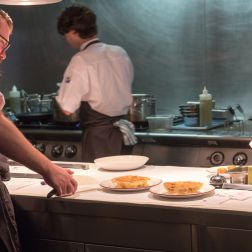 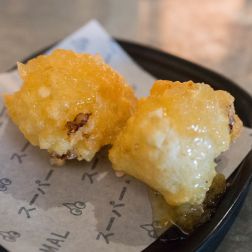