What to do on a cold March morning?  Take advantage of being in the area and run the Victoria Park 10k.  Find out how Mr Smith managed to run the second personal best within 7 days…

Mr Smith looked out of the hotel bedroom window at 7 am to see nice clear skies, but he knew the forecast was for it not to stay like it, but he lived in hope.  The preparations for the race had not been good, having to skip some training during the week leading up to it (due to work, ankle and stiffness from the Brighton Half Marathon).  As well as that Mr Smith had felt sick over night, so he was really not feeling good, but he carried on the preparations and got ready to go.

Possibly a bit heavy on the breakfast front, the extra banana was possibly a bad thing, but the race started at 10, which is an hour later than most races, so a bit of extra food had been consumed.

Stepping outside the hotel at 9 and walking to the race, Mr Smith hoped that the weather would hold out, but it was now overcast and bitterly cold.  25 minutes later he was at the race start and collecting the race number, just in time to watch the half marathon start.

Number pinned on and keeping wrapped up warm, Mr Smith finished the pre race preparation, which mainly involved keeping out of the rain and sleet that had now started and rubbing hands vigorously to get some feeling back in the fingers, and yes he was wearing gloves.  It was bitter!

At 10.05 the 10k race was preparing to start, the 5k had gone off at 10 am and he was hoping that the start be go soon as running to keep warm was needed!

The organisers were trying to describe the course on a tannoy, but sadly the runners struggled to hear it as the wind was in the wrong direction.  Never mind, Mr Smith new it was 3 laps of the park and would follow the directions of the marshals.

Before the start Mr Smith really had no idea how it would be, but he wanted sub 50 minutes, but had no expectations of anything quicker.

And they were off, Mr Smith set off at a solid pace, trying not to go too quickly, but soon got in to his running.  After about 400m the course turned and the 10k joined the Half Marathon runners.  This was the first time Mr Smith has been involved in a multi distance race and it did mean that you are not able to identify who you are running against, some half marathoners, 10k runners and also the 5k runners.  This then became a competition against himself, rather than trying to beat people around him.

The good thing about Victoria Park is that it is flat, but it is also an open park so the paths are shared with pedestrians, runners out for their normal run and some cyclists.  Luckily this did not cause any problems.

The first km done and it was sub 5 minutes and Mr Smith was feeling a lot better than he thought and the ankle was not too painful.  A quicker second KM and then the 3rd was a bit too quick, down to 4:23.  At this point Mr Smith said to himself to back off a bit, but the rhythm felt good.  The next few km’s were just under 4:40 pace and things were still going OK.

It was proving hard work with the cold, but the rain had stopped so it was not too bad for running (once you had got warm).  Mr Smith was amazed that some people were in short sleeve tops and he was grateful that he had the thermal long sleeve top and long tights.

Then the struggles began, the heart rate was high and the mind was really struggling and even thinking about dropping out, something he has never done before.  However, now that he has a coach the thoughts came in to his mind about what the coach would say, so he kept going, but backed off a bit and put in 2 km’s around the 4:45 pace.  KM’s 7 and 8 were a real mental struggle, but Mr Smith new by that point that his time was looking good so decided to get through 8km’s and try to lift up the pace again for the last 2, both of which were run in 4:29 pace.

After the 3 laps it was time to turn towards the finish for the last 500m.  By this point he knew who he was racing against and tried to give all he had left in the tank, which was not much!  He could not muster a sprint finish, but was very pleased to cross the line and stop the watch.  The good news was that the watch had measured 10k and it stopped at 46:28, which he knew was about a minute faster than the previously recorded 10k best (recorded on the watch but not the official chip time).  He did not know if it would be faster than the Kew Gardens 10k or not, which his GPS had measured nearly 400m short.  He would have to wait to get back to the hotel to check the times and wait for the chip time to come through.

Mr Smith can definitely say he was surprised, very surprised in fact.  But before too much celebrating could be done it was time to retrieve the bag, put layers on and head back to the hotel.

To be honest, Mr Smith did not enjoy the run that much, the way he felt and the bitter cold to start with, but he did enjoy the feeling at the end of it knowing how well he had done.  The lack of enjoyment was nothing to do with the course or the organisation, just how he felt during it.  Hats off to the marshals and volunteers who were great and dedicated in the conditions. 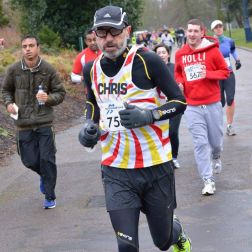 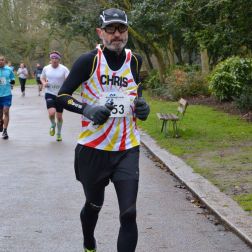 During the normal post race analysis Mr Smith is pleased to see that he managed to do negative 5k splits, despite the horrible couple of kilometers towards the end.  The first 5km were done in 23:19 (which would have put me in 10th out of 111 in the 5k race) and the second in 23:10.  Mr Smith tries to target even pacing or a negative split if possible, so this is very pleasing.

Although the ankle was fine during the run Mr Smith can definitely feel it after, especially when pushing through the foot.  However, it was not as bad as expected and Mr Smith believes that the coaching is definitely beneficial and this gives hope of meeting the goals for this year, one of which is a 45 minute 10k.

The official chip time was 46:27. The Kew Gardens 10k was a chip time of 46:31, 4 seconds officially quicker, but Mr Smith knows that is definitely the best he has run in a 10k as he considers the Olympic Park 10k at 47:30 as the previous personal best.

There might be a few differences as the places are based on the gun time, not the chip time, but the v45 category is correct 🙂

One Reply to “Victoria Park 10k”