Well, that was a different way to spend a Sunday.  This was a first for Mr Smith, yes he has done a few sportives but never a Time Trial and what a unique experience it was.  Not everyday you can do a time trial round one of the worlds most iconic Grand Prix tracks.

Having made most of the journey the night before Mr Smith left the hotel about 8:15 for a 9:55 starting time.  This would leave lots of time to prepare and work out what needed to be done.

The last time Mr Smith went to Silverstone was in the very ealy 90’s to watch Nigel Mansell win.  One of the lasting memories were the hours to get out of the car park, but this was not a Grand Prix and the roads have improved, a lot!

Driving up the A5 and then towards the circuit there was very little traffic and a perfect way to start.  Getting there Mr Smith was directed towards the car park and had a quick walk round to see where things were.  We were based in the National Pit area and there were already cyslists warming up ahead of the Team Time Trial.

Mr Smith took some time to take in the surroundings and watch the first few teams going round in the TTT, including a team of 4 recumbent bikes.

Some were very quick, but others not so, which gave Mr Smith confidence that he would not look out of place.

The first port of call though was the Halfords tent.  When packing the bike up there had been a noise from the rear wheel of something catching, but there was nothing obvious.  After some testing it looks like the rear hub is dry, which will need replacing.  The good thing though is that they checked the front as well and between home and the track the front bearings had gone loose, which they tightened up.  That was lucky!

So now time to get ready and prepared for the ride.  The bike was decked out with the devices, the One Pro Cycling kit on, signing on done (that was a first and it felt quite good) and the warm up started.  It was needed, it was a bit chilly, despite the sun.  Going round the warm up and doing some spins the legs felt good.  Mr Smith had observed some of the serious TT racers warming up on a turbo, which he had taken with him, but opted for the warm up area.  Maybe next time the turbo will be used.

Just at the end of the warm up Mr Smith spotted Mother Smith and a family friend who had just arrived to support.  After a brief hello it was time to walk down to the start, not easy in cleats!

So this was it, now or never!  After a briefing from the marshall, basically stay right to start with and watch out for the recumbents.  That was it, mount, start to ride and pass the start line.  Basically, this was like coming out of the pits and Mr Smith stayed in the pit lane exit until it was clear before moving over and getting up to speed.

Heading down to Maggots Mr Smith was already well over 30km and was thinking how good it was.  Now it was head down and ride hard!  No messing go as hard as possible for as long as possible.

The track was quite busy with some of the teams still on the track and the earlier individuals, but it was easy to avoid people.  Being very conscious that this was a TT Mr Smith made sure he did not do any drafting at all.  This  was fine down through Becketts, Chapel and the Hanger Straight, but as the turn was taken through Stowe and down through Vale and Club the wind was definitely causing a problem and with the same down Pit Straight before a bit of relief going through Village before hitting it again on the Wellington Straight it was tough going.

Obviosuly with a lap with the effect of the wind balances out, but boy was it like hitting a wall at times and the cross wind at The Loop was a bit challenging at times, but then it was time to get round Luffueld and Woodcote and head to the finish line and a wave to Mother Smith on the way by.  The only problem was that was the first of the laps and the short one.  6 more to go!

Keeping the head down and trying to lap as quickly as possible it was definitely getting harder but the focus was there to push on.  The 4th lap was possibly the toughest mentally, but with 2 laps to go and the realisation that there was just over 10km to go the mental doubts disappeared.

Although Mr Smith had been overtaken by a few serious TT riders there had not been that many going past and he enjoyed overtaking others, some on road bikes and others on TT bikes.

So it was now down to the last lap and although Mr Smith had been giving it everything he dived in to the depths of the reserves to try and finish as quickly as possible.  This was a lap battling with the bike and the wind and trying to get quicker (which was not obviosuly happening) and getting to the finish straight where every last bit of energy was used to push to the line.  A sprint?  Absolutely not, just has hard as he could go.

There had been 2 goals that Mr Smith had really wanted to achieve, 9:45 for a lap (which was always going to be at the peak of any capacity) and 70 minutes (which was a already stretch target) for the event.

On the way round Mr Smith had been keeping track of the lap times and no matter how hard he was going he could not quite get the 9:45, with the average lap around 10:00.  This did mean that he was just going to miss out on the 70 minutes, despite pushing hard.  The final time was 1:10:23, which is actually really pleasing.  That is a pure time, no drafting and on a road bike.  This was also on a blustery open and exposed airfield!

A lap to warm down was much needed and gave the opportunity to really take in the surroundings and realise that he was riding round a Grand Prix track.

Definitely giving it some

Down the finish straight

Down the finish straight

The final part of the morning was to slowly go back in to the pit lane and off the bike before a cuppa in the Paddock Cafe.  Boy was that cuppa needed!

In terms of results Mr Smith finished in 135th out of 284 on the 25 mile TT.  This though does include the teams and when looking individually Mr Smith was 63rd out of 131 .

Considering this was a first attempt and on the standard road bike that is very pleasing.

The stats from the ride (lap 1 was the short lap). 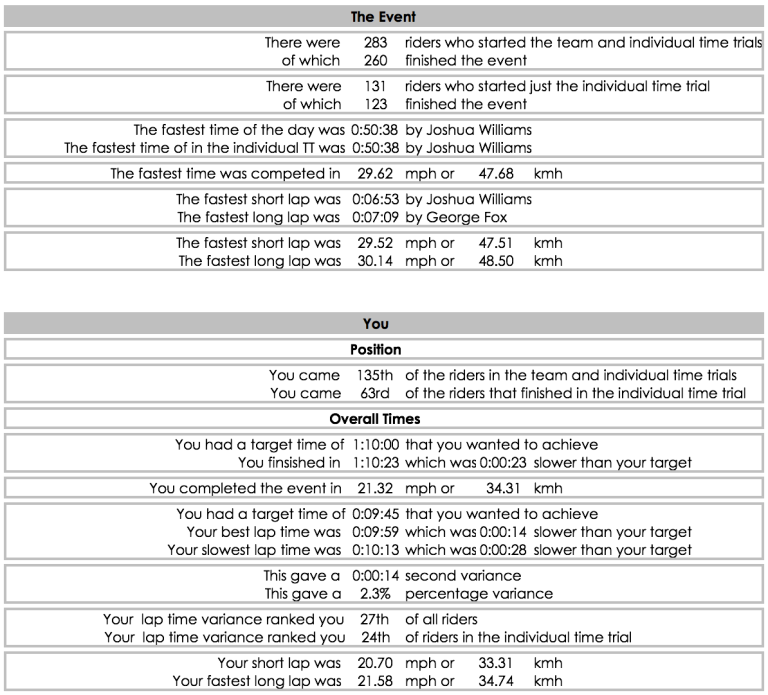 These actually give Mr Smith the most pleasing stat.  On analysing the lap time variability (fastest v slowest) Mr Smith ranked 27th of all riders and 24th out of the Individual ones, with a 14 second variation on the full laps.  These basically mean that Mr Smith was one of the most consistent riders in terms of time and did not fade away.  The best performer of the day (for variability) was Stuart Hayes, who just happens to be an Olympic Triathlete, with only a 5 second variance, impressive stuff.

Although neither of the time targets were hit the laps were consistent and with an overall average speed of 34.31kmh (21.31mph), by far the fastest average.

So that was the first, but I doubt it will be the last.  After all, Mr Smith needs to go back next year to hit the targets!